Iran executes far convicts more in prisons than in public... This thread is for those we may never see swinging. Some have already had their last dance. Some are waiting. Some we may see, most we won't.

Hanging offenses in Iran include murder, rape, kidnapping, armed robbery, drug trafficking, and whatever the courts decide is 'enmity with God.'
These three guys were arrested in Vavbash(?) August 31, 2011.

These men are handsome
H

These have likely had their last dance. All arrested in 2008.

Three guys accused of rape - we know what happened to them. Last two pics are same guy - 'David'

Misc Swingers; all collected by Iran's authorities in 2009 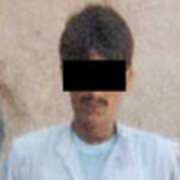 I am so jealous of the rope. Would have liked to have his last dance.

Alas, only this one picture before his elevation...

10 Azar - trust, a third member of the gang's notorious "vultures" in various parts of Tehran, women and young girls Myrbvdnd, at dawn yesterday in the streets of Islamabad, was hanged in Karaj.

The members of this band with a red arrow car as a taxi, night stalking young women were on their way and then ride each woman or girl, threatened her with a knife Zyrsndly Mykshandnd car and taken to the desert in Karaj.
The criminals steal the money and gold after the hijacked passengers were attacked and then thrown out of the dark desert him half-dead. The members of this criminal gang, car door handles were dug up trapped passengers escape is not. Meanwhile, its recording took so long to arrive where screaming victims.

Five were members of a criminal gang, all in Karaj Branch 119 were tried in criminal court.Supreme Court judges were confirmed. P. creator, band leader, Fifth Avenue April HESARAK undertaken in August and September in the second band member Qasim al eighteenth Mehr Karaj football field and in the presence of the cranes were hanged.

Yesterday morning after the third death row prisoners sentenced by the H Hasanvand Islamabad, which was undertaken within the park were hanged, and thereby gang of black vultures Display the file was closed. Seven hours and fifteen minutes in the morning yesterday sentenced to death by a police car elegans brought to the place of execution. He was accompanied by two bodyguards and walking to the car when his eye fell on the rope, and the horror Gryhash was shaking from head to foot.
Last edited: Sep 10, 2013
You must log in or register to reply here.

Predator Story of a Serial Killer Chapter One