The Ukrainian military claims to have struck a major airbase deep inside the occupied Crimean peninsula a few hours ago around 3pm local time killing one person.

Russia has disputed the claims and says it was not an attack but a detonation of ammunition. 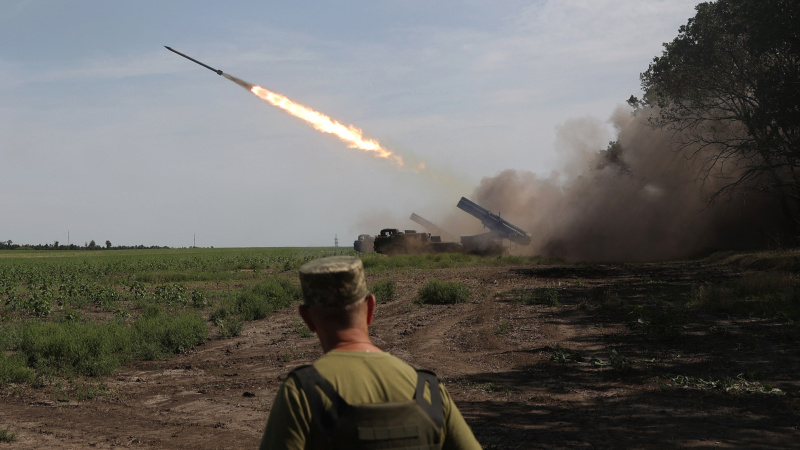 A Ukrainian artillery unit fires a rocket launcher near a frontline position in Donetsk region on August 27.

Ukraine is considering shutting down the Zaporizhzhia plant — the largest in Europe — due to the deteriorating security situation, according to the country's chief state inspector for nuclear and radiation safety.

Russia and Ukraine continue to blame each other for shelling at and around the plant after the International Atomic Energy Agency said in a report yesterday that it was “gravely concerned” about the situation on the ground.
Ukraine sets its sights on Kherson: The last week has seen the most ambitious ground assaults by the Ukrainians since the beginning of Russia's invasion, and both US and Ukrainian officials said that Ukrainian forces aim to take back most of the southern Russian-occupied region of Kherson by the end of 2022.

European Commission President Ursula von der Leyen made a series of proposals, including a “mandatory target for reducing electricity use at peak hours.”

The proposals were introduced with the goal of helping European citizens deal with rising energy costs as Russia’s actions in “actively manipulating the gas market” and the effects of climate change cause prices to surge.

The Pentagon is preparing detailed analysis and working out how to support Ukraine's military in the medium- and long-term, including after the war with Russia has ended, according to three defense officials. The US has provided billions of dollars in military aid to Ukraine since Russia invaded in February.
Ukrainian forces near Kharkiv: Ukrainian forces are advancing to the east of Ukraine's second-largest city Kharkiv, with recent social media footage geolocated by CNN showing soldiers in the town of Volokhiv-Yar, which was occupied by Russian forces until recently. If Ukrainian forces are able to consolidate their presence in Volokhiv-Yar, they could encircle Russian troops in the neighboring town of Balakliya.

Russian President Vladimir Putin claimed that Russia has “lost nothing” in its invasion of Ukraine in a speech on Wednesday. But based on downgraded intelligence, the US believes that Russia is facing "severe" shortages of military personnel in Ukraine.

He also used misleading figures to claim that low- and middle-income countries are receiving a fraction of the Ukrainian grain exports they were expecting under the landmark UN-brokered Black Sea Grain Initiative. In a statement to CNN, the United Nations said that under the Black Seas Initiative, roughly 30% of “grains and other foodstuffs” have made it to low- and lower-middle-income countries, or roughly 700,000 metric tons.
m/ ^_^ m/ "The goal of all life is death" - Sigmund Freud
​ 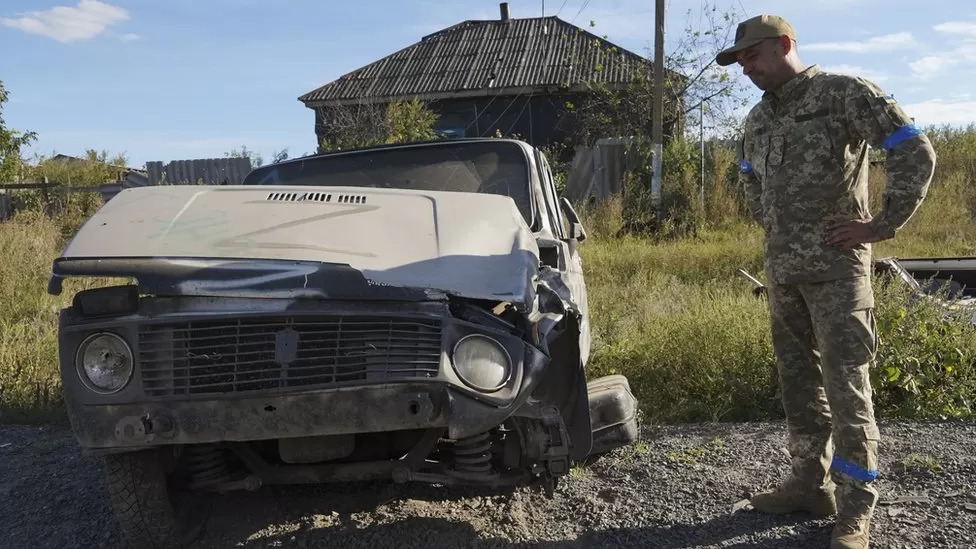 A Ukrainian soldier beside a Russian vehicle, with the Z marking, in the Kharkiv region on Friday Sept 9, 2022.

Ukrainian officials said troops entered Kupiansk, a vital eastern supply hub for Russian forces, on Saturday.
Russia's defence ministry then said its troops have retreated from nearby Izyum to allow them "to regroup".
The ministry also confirmed the withdrawal of troops from a third key town, Balaklyia, in order to "bolster efforts" on the Donetsk front.
The Ukrainian advances - if held - would be the most significant since Russia withdrew from areas around Kyiv in April.
Izyum was a major military hub for the Russians, and was subject to intense fighting in the early stages of the invasion.

"A three-day operation was carried out on the drawdown and organised transfer of the Izyum-Balakliya group of troops to the territory of the Donetsk People's Republic," the Russian statement said.
"In order to prevent damage to the Russian troops, a powerful fire defeat was inflicted on the enemy."
Shortly afterwards, the chief administrator of Russian-controlled parts of the Kharkiv region recommended that its residents evacuate to Russia "to save lives", according to the Russian state-run TASS news agency.
And the governor of the neighbouring Belgorod region, in Russia, said mobile catering, heating, and medical assistance would be available to people queuing to cross the border.
The advances will be used as a sign that Ukraine's army can take back Russian-occupied territory, while the country continues to ask for military support from the West.
For Russia, the Ukrainian gains - if secured - would mark a humiliating setback, as its forces invaded captured the area in the first week of the war. 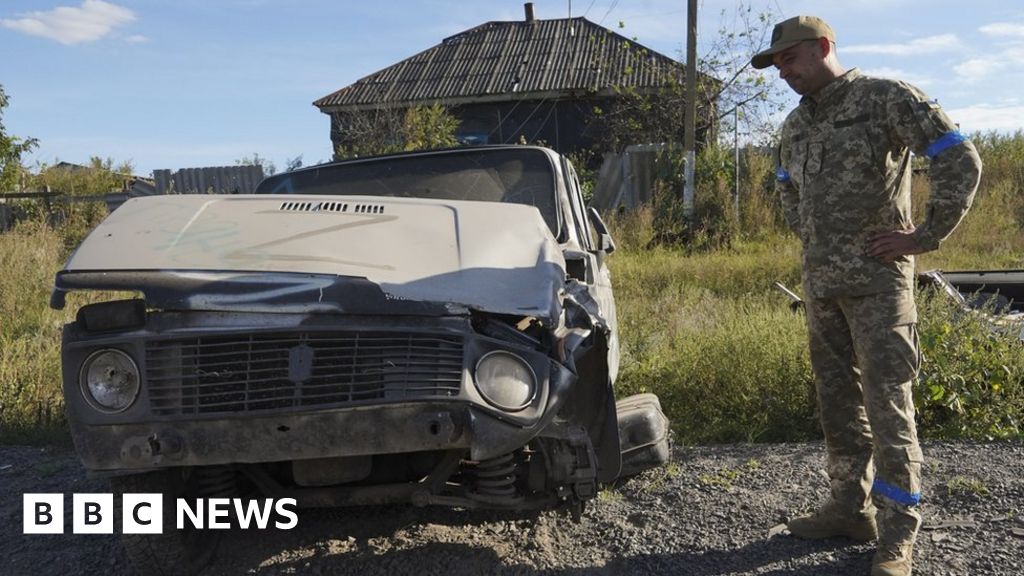 The Ukrainian advances - if held - would be the most significant since Russia withdrew from near Kyiv in April.
www.bbc.com
m/ ^_^ m/ "The goal of all life is death" - Sigmund Freud
​

Ukranian territory occupied by Russia is rapidly shrinking as recent maps show the Ukranians made significant gains in the last couple of days and in some areas pushed all the way to the Russian border and further south they are currently close to Donetsk. 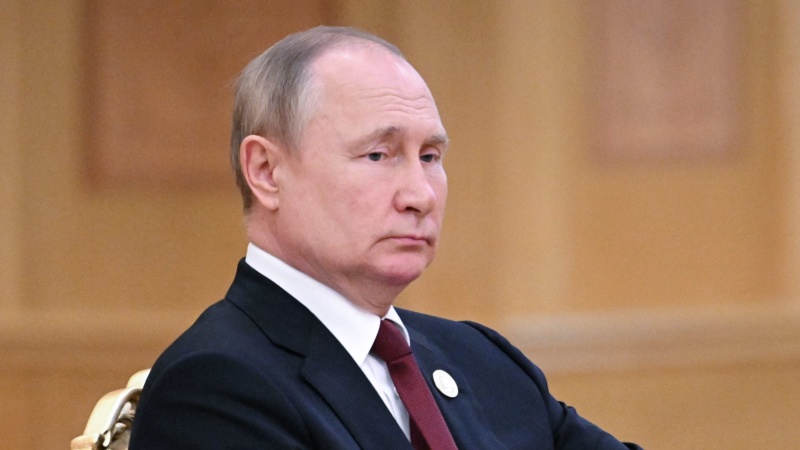 After a series of crushing defeats against Russian forces in Ukraine over the weekend, Russian President Vladimir Putin went into retreat himself.

The Russian president postponed a planned meeting with his top military brass and representatives of the defense industry in Sochi, in a sign that Putin is caught in the lurch after Ukrainian forces reclaimed a slew of territory that Russian armed forces had seized earlier in the war, according to TASS. It is thought to be the largest Russian defeat since the beginning of the war.

“The Sochi meetings are in demand, they will continue,” Kremlin spokesperson Dmitry Peskov said, indicating that the meeting was just being postponed, not canceled.

Peskov said Putin had pushed off the meeting with Russian defense leadership and defense industry representatives, which is usually held in May, due to a “very, very busy” schedule.

But he also suggested that Putin needed time to digest the new developments in the war, alluding to the losses.

It seems Putin is not taking well to the biggest defeats Russia has faced in the war, with the president delaying meetings with top leadership because he’s just “very, very busy.”
www.thedailybeast.com
m/ ^_^ m/ "The goal of all life is death" - Sigmund Freud
​ 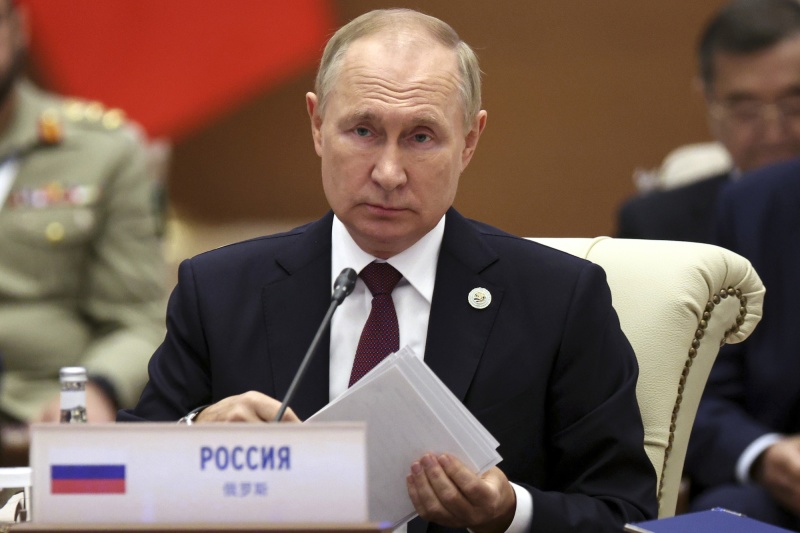 In his first comments following Kyiv’s successful counteroffensive in northeastern Ukraine, Russian President Vladimir Putin said the main goal of Russia's "special military operation" — what he calls the Ukraine invasion — has not changed.

Speaking at a press conference at the end of the Shanghai Cooperation Organization summit in Uzbekistan, Putin said the main goal continued to be “the liberation of the entire territory of Donbas” — the Luhansk and Donetsk regions — and that Russia was in “no hurry.”

"This work continues, despite these attempts to counterattack by the Ukrainian army. Our offensive operation in the Donbas itself does not stop. It continues," Putin said. "It goes at a slow pace, but it keeps going. Gradually, gradually, the Russian army occupies new territories."

On ending the fighting, Putin said, “The Kyiv authorities abandoned all agreements, they were thrown into a drawer and announced that they would not seek any agreements with Russia, but would seek victory on the battlefield.

"Well, the flag is in their hands. They are now just trying to do this by conducting this counteroffensive. Let's see how this ends,” Putin said.
Putin also took aim at the West in his justification for the invasion, claiming that "for decades, the idea of the collapse of the Soviet Union and the collapse of classical Russia has been cultivated in the West."

Some context: This month brought huge strategic losses for the Kremlin as Ukraine carried out counteroffensives in the northeast and south. Ukraine has recaptured a total of 8,000 square kilometers (about 3,088 square miles) of land, Ukrainian President Volodymyr Zelensky said Wednesday.
m/ ^_^ m/ "The goal of all life is death" - Sigmund Freud
​ 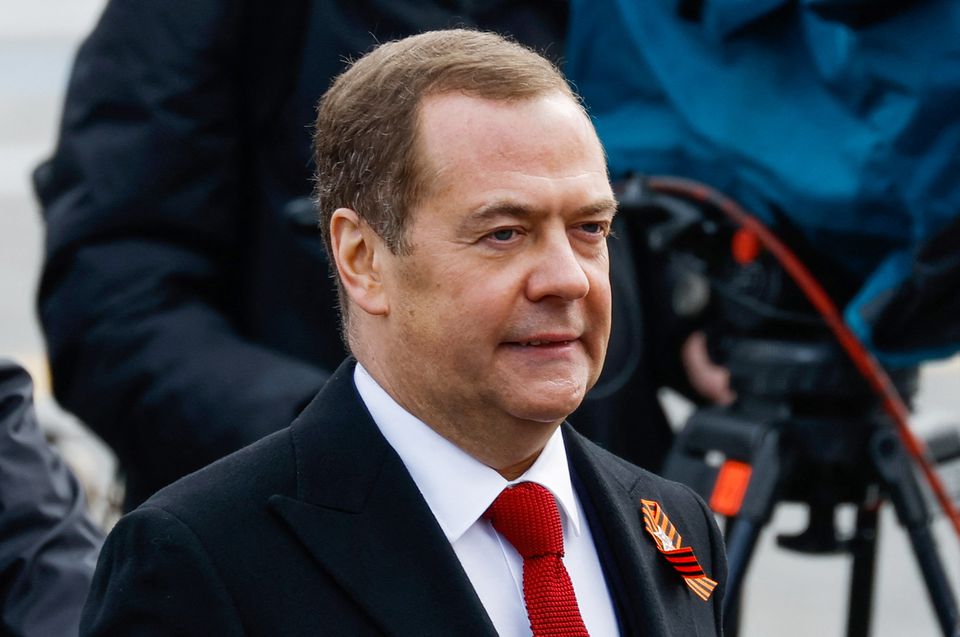 Deputy Chairman of Russia's Security Council Dmitry Medvedev attends a military parade on Victory Day, which marks the 77th anniversary of the victory over Nazi Germany in World War Two, in Red Square in central Moscow, Russia May 9, 2022.

Russia on Tuesday gave support to plans by separatists which it backs in Ukraine to hold referendums paving the way for the annexation of swathes of additional territory, a direct challenge to the West that could sharply escalate the conflict.

After nearly seven months of war, including a critical battlefield defeat in northeastern Ukraine, Putin is pondering his next steps.

In what appeared to be choreographed requests, Russian-backed officials across 15% of Ukrainian territory - an area about the size of Hungary or Portugal - lined up to request referendums on joining Russia.
m/ ^_^ m/ "The goal of all life is death" - Sigmund Freud
​ 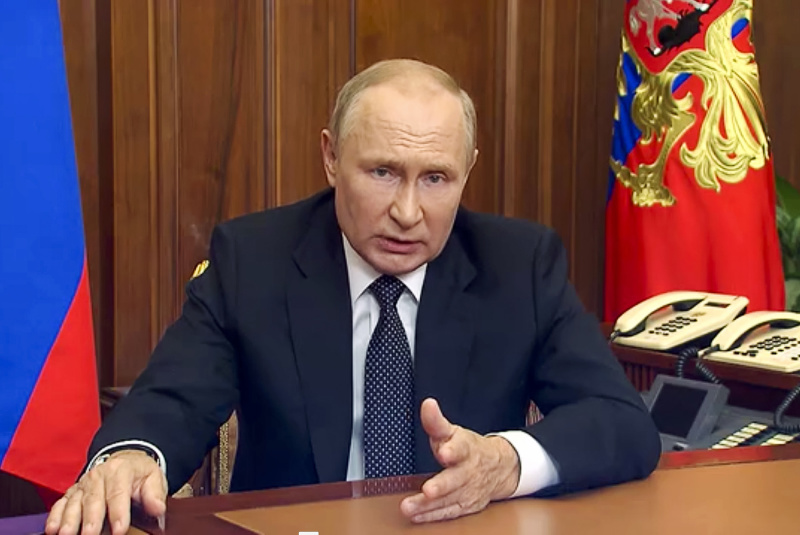 
Russia is launching a partial mobilization of its citizens, President Vladimir Putin announced during a highly anticipated speech to the nation on Wednesday morning.

“In order to protect our homeland, its sovereignty and territorial integrity, to ensure the security of our people and people in the liberated territories, I consider it necessary to support the proposal of the Ministry of Defense and the General Staff to conduct partial mobilization in the Russian Federation,” he said.
Click to expand...

"I repeat, we are talking only about partial mobilization. That is, only those citizens who are in the reserve and, above all, those who served in the armed forces, have certain military specialties and relevant experience, will be subject to conscription."
Click to expand...

“After the Kiev regime actually publicly refused a peaceful solution to the Donbas problem today and, moreover, announced its claim to nuclear weapons, it became absolutely clear that a new next large-scale offensive in the Donbas, as it had already happened twice before, was inevitable.”

It is unclear what Putin is referring to with his mention of nuclear weapons.
m/ ^_^ m/ "The goal of all life is death" - Sigmund Freud
​

It's time for Pootie to get a mysterious permanent vacation.

Mykhailo Dianov, a musician and a Ukrainian soldier recently released in a prisoner exchange. The guys said they were beaten every day, electrocuted and starved. 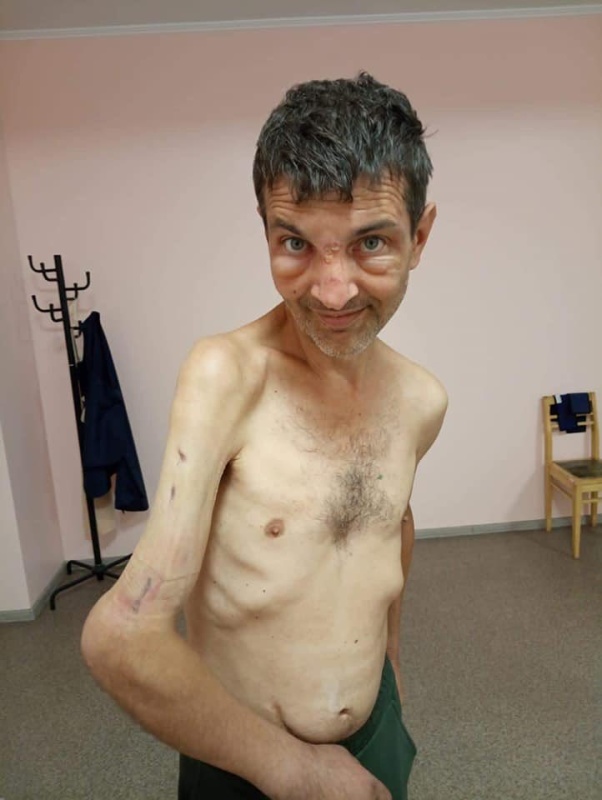 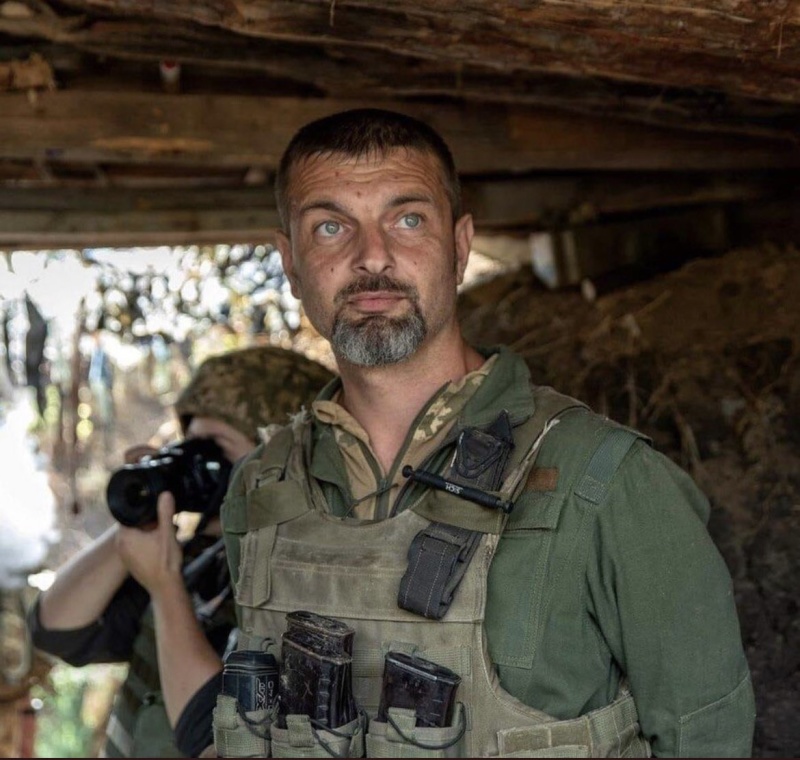