Seven people are so far known to have died in bombing by Russian forces, Ukrainian police say.

Officials say an attack on a military unit in Podilsk, outside Odessa killed six people and wounded seven.

One person died in the city of Mariupol, they added.

There are reports of attacks on military infrastructure across Ukraine, and Russian convoys entering from all directions. Missile strikes and explosions have been reported near major cities.

BBC correspondents have heard loud bangs in the capital Kyiv, as well as Kramatorsk in the Donetsk region of eastern Ukraine.

Blasts have also been heard in the southern port city of Odesa.
m/ ^_^ m/ "The goal of all life is death" - Sigmund Freud
​

A woman is wounded after an airstrike damaged an apartment complex in city of Chuhuiv, Kharkiv Oblast, Ukraine.
m/ ^_^ m/ "The goal of all life is death" - Sigmund Freud
​

Quick summary of events so far:

Abosultely despiciable behavior by Putin! Apparently he thinks he can do Hitler better than Hitler.

A man sits outside a destroyed building in Chuhuiv, following bombings.

Moscow first struck Ukraine's military infrastructure and border guard units. Then Ukrainian forces said Russian military vehicles had crossed the border near Kharkiv in the north, Luhansk in the east, Russian-annexed Crimea in the south and from Belarus too. Belarus's authoritarian leader Alexander Lukashenko said his country's military were not involved but could be if needed.

Russian tanks were later seen on the outskirts of Kharkiv, a city of 1.4 million people. Russian forces also reportedly landed by sea at Ukraine's major port cities of Odesa on the Black Sea and Mariupol on the internal Sea of Azov.

Much of the fighting appears to be centred around the east.

But clashes have have also been taking place around the capital Kyiv in the north and the southern ports of Odesa and Mariupol.
Ukraine's army said Kyiv's Boryspil international airport was among a number of airfields that had been bombed, along with military headquarters and warehouses in the big cities of Kyiv, Dnipro, Kharkiv and Mariupol.

Footage verified by the BBC showed missiles slamming into an airport in the western city of Ivano-Frankivsk.
Russia claimed to have destroyed more than 70 military targets.

People wait in a traffic jam as they attempt to leave the city of Kharkiv.

Elsewhere in the country, another traffic jam forms as people try to leave the capital Kyiv.

Headlines for the history books.

Here is my selection for this brutal and historic day in Ukraine all high-resolution powerful images. Thank you for following our updates. In total 137 Ukranians lost their lives today hundreds more are injured. 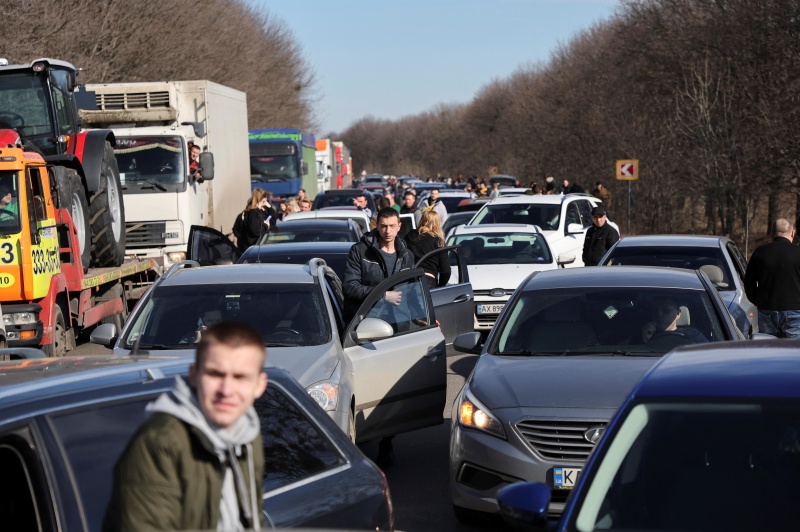 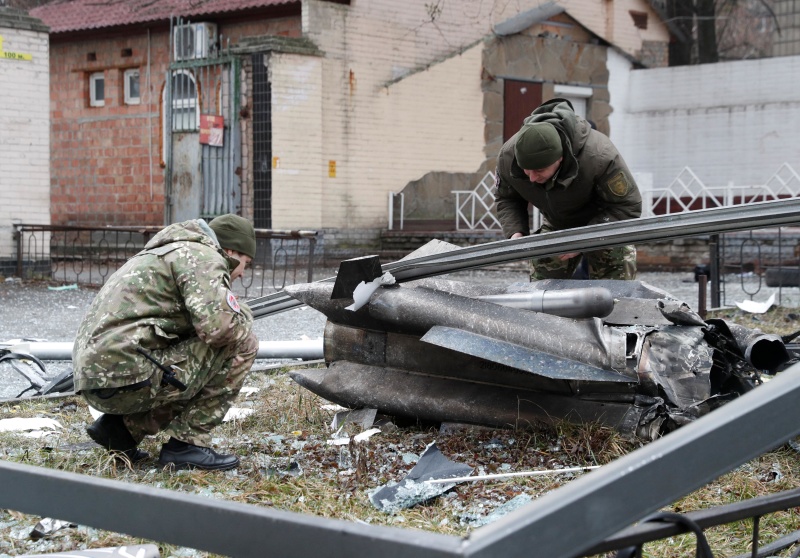 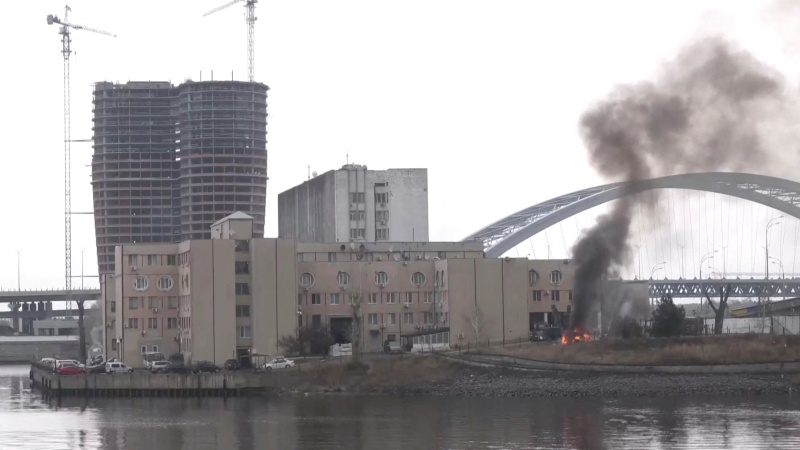 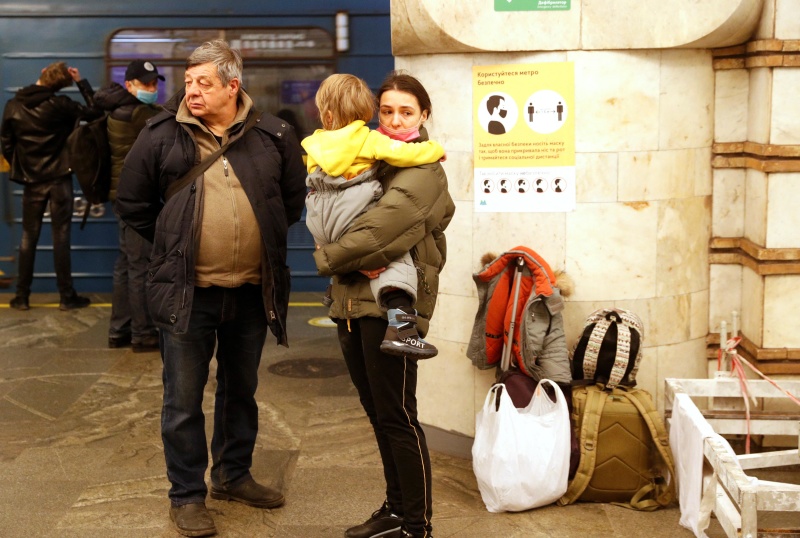 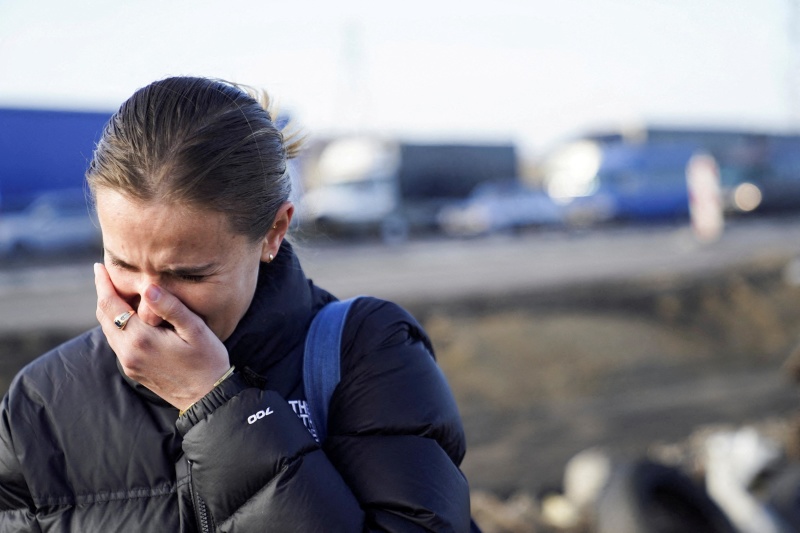 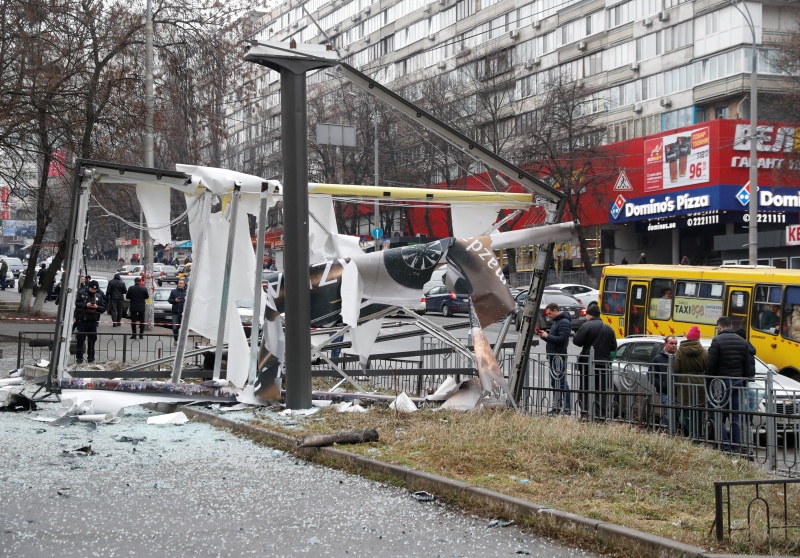 The 'Russian Empire' and the Thousand Year Reich' have a lot in common, including consequences. 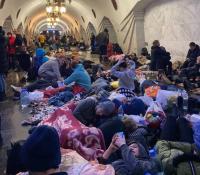 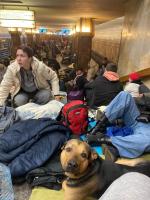 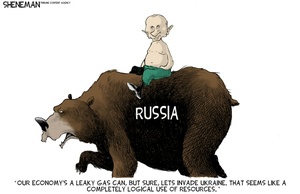 People look at a damaged residential building at Koshytsa Street, a suburb of Kyiv on Feb 25, 2022.

Zelenskiy looks tired and depressed at a briefing today in Kyiv. It's clear he hasn't slept much.

A child sits on a swing in front of a damaged residential building, after Russia launched a massive military operation against Ukraine, in Kyiv, Ukraine February 25, 2022.
m/ ^_^ m/ "The goal of all life is death" - Sigmund Freud
​

In the next couple of hours I will be posting updates on the war in Ukraine.

Another sad horrifc day for Europe with hundreds dead including civilians and children.

Two people were killed earlier today in Kyiv after a block of flats was hit by a missle.

Hurrah for the UKRAINIANS !!!

Ukrainian soldiers on a small island in the Black Sea had scathing last words before being bombed by a Russian warship on Thursday: "Go f--- yourself."

Thirteen border guards were stationed on Snake Island, owned by Ukraine and roughly 30 miles off the coast from the country, when a Russian warship asked them to surrender or be bombed, according to a tweet from the Ukrainian Embassy in Georgia.

A Russian officer can be heard telling the Ukraine soldiers to lay down their arms to "avoid bloodshed and unjustified deaths."

A Ukrainian soldier responded with the expletive and all 13 soldiers were killed, Ukrainian officials announced.

“All border guards died heroically but did not give up,” Ukraine President Volodymyr Zelenskyy said in a press briefing. "All of them will be posthumously awarded the title of Hero of Ukraine. Eternal memory to those who gave their lives for Ukraine." 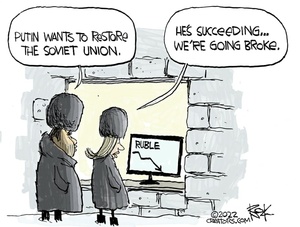 Germany says it will supply Ukraine with 1,000 anti-tank weapons and 500 Stinger surface-to-air missiles to use against Russia. This is absolutely World War III.

More and more nations are getting dragged into this conflict whether they want it or not.

This will be the biggest and bloodiest war of the 21st century!
m/ ^_^ m/ "The goal of all life is death" - Sigmund Freud
​
You must log in or register to reply here.