After literally years of planning, CDG member Tmorose and I have finally set a date for our necro session. He will become victim 8 on my necro resume. I am attaching a link to his profile where you can see some of his dead pictures. He is every killer's dream.

He has agreed to post the pics I take during our session here along with a brief summary of what we have planned.

We will be meeting twice on May 4th and 5th and will be doing three different scenes.

Tmorose will come to my hotel room. He is a popular escort named Joshua in Delaware. I have hired him to worship his meaty soles. During our email exchanges Joshua made it clear that he only lets clients play with his meaty feet. When he comes to my hotel room, I try to touch his stomach and cock but he politely reminds me that I can only use his feet. He lays down on the bed and I remove one of his sneakers and socks and start worshiping his foot. Unfortunately for Joshua I want his entire body and since he doesnt want to give it to me I guess I have to kill him. I will inject poison into his toe. He will ask what is going on but the poison is fast-acting and he falls back on the bed convulsing as the poison takes effect. I will cuddle with Joshua enjoying his last moments on this planet. "You like guys worshipping your feet right Josh? Then only fair you die with a sock shoved down your throat." I will then shove a sock down his throat as he slowly dies in my arms.

This scene will last 3 hours. 2 hours and a half for necro time and a 30 minute break. The scene will end with me leaving the body in a tub to be found by an investigator.

I now play an investigator who was called in to the hotel because there is dead body in a room. I will find Joshua's cold corpse in a tub and I will investigate the murder scene and prepare the dead body to be sent to a morgue. The scene should last about 45 minutes.

On the following day I will play the role of a necro mortician who received Joshua's corpse for examination in the morgue. I will perform examination and will also abuse the corpse. The mortician will enjoy the corpse so much he will decide he wants to take it home. I will hide the body in a closet and say the corpse has mysteriously vanished.

If Tmorosse and I have good chemistry, we will continue this scene next time we meet when the mortician comes home to play with his new dead toy.

Super! I look forward to the continuation and the session of May 4-5! 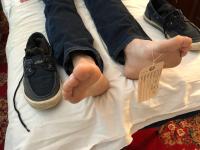 SIR said:
Super! I look forward to the continuation and the session of May 4-5!

There was no session unfortunately. Still looking for a good corpse though...
L

very nice, would be great if we can see his socks
You must log in or register to reply here.

G
Gaius vs Marcellus in a Barefoot Contest