On April 20th, 1999 Eric Harris and Dylan Klebold went on a shooting rampage in Columbine highschool, they killed twelve students and one teacher, after that they went into the library and shot themselves in the head. Eric, the one leaning against the bookshelf, shot himself in the mouth, and it blew off the top of his head, he died instantly from the shot. Dylan, the one lying on the ground, shot himself in the left temple, and he laid there for about five minutes suffering, before he drowned in his own blood.

These are one of my favorite Gore images I have found so far, I mean you can see Eric's eyeball that popped out sitting on the floor. And Dylan's boots, damn that's hot. Both of them, but Dylan especially, were so hot and cute, Honestly the 90s were such amazing times. 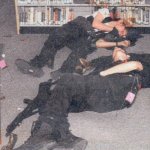