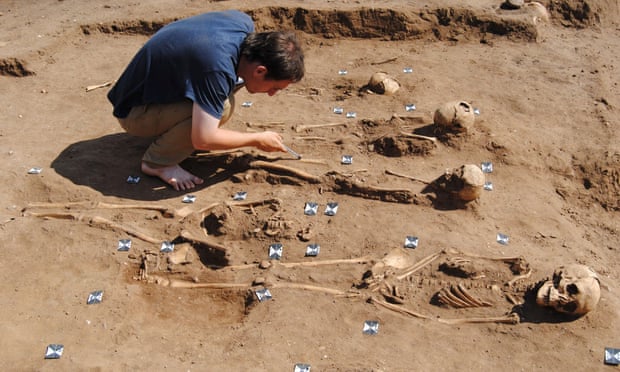 The mass grave near Immingham contains the remains of at least 48 men, women and children. Photograph: University of Sheffield/PA

A mass grave containing the remains of dozens of victims of the Black Death offers chilling new evidence of the speed and scale of the devastation the plague brought to rural England, according to archaeologists.
The grave, discovered in a remote corner of rural Lincolnshire, has been dated to the 14th century, almost certainly to the earliest and deadliest medieval outbreak of the disease in 1348-9.
It contained the bodies of at least 48 men, women and children who were laid in a sandy pit within days of each other. DNA tests on the bodies found the plague pathogen, confirming how they died.
About half the population of England was wiped out within 18 months by the 1348-9 pandemic. Perhaps surprisingly, however, direct archaeological evidence for the Black Death is extremely rare, according to Hugh Willmott, senior lecturer in European historical archaeology at the University of Sheffield, who led the excavation.
Advertisement

While a small number of plague mass graves have been excavated in London, he said, nothing comparable has ever been found in a rural context, making this a discovery of national importance. Analysis of the find, made in 2013, has been published for the first time in Antiquity.
“One of the assumptions in the past has been that perhaps you get mass graves in towns where you have a higher density of people, [whereas] in villages people were being buried as normal in the parish churchyard,” said Willmott.
“But actually what this suggests is that this was a rural community that couldn’t cope, and when the Black Death arrived, the normal system for doing things broke down.”
The grave was discovered by chance during a survey of the now-ruined Augustinian priory of Thornton Abbey, close to Immingham in north Lincolnshire, on the east coast of England. Nearby, archaeologists found the site of a medieval hospital attached to the priory, suggesting the dead or dying had been brought there in desperation as the plague struck, overwhelming the canons who were then forced to bury them together.
“People couldn’t be buried in the parish graveyard – perhaps the priest or the gravedigger has died – [so] you turn to the church, the canons at the abbey down the road. This is a snapshot of a not often seen rural catastrophe.”
While the layout of the bodies showed they had all been buried within a period of days, said Willmott, they had not been flung without ceremony into a shared pit. Instead, the victims – more than half of whom were children – were shrouded and laid carefully side by side.
“They are trying to treat them as respectfully as possible, because in the middle ages it’s very important to give the dead a proper burial. Even though it is the height of a terrible disaster, they are taking as much care as they can with the dead.” 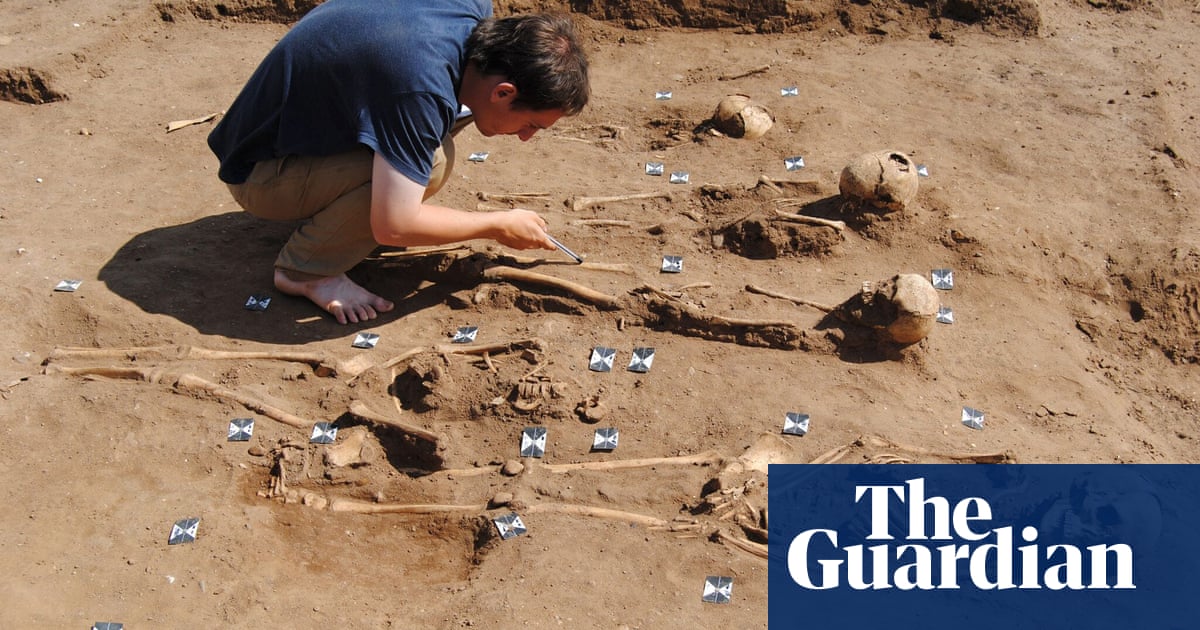 Incidentally this proves that the Black Death really was bubonic plague - this site and two mass burials in documented Black Death cemeteries in London have all yielded the DNA of Yersinia pestis , the plague bacillus