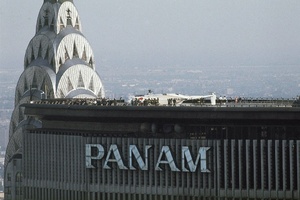 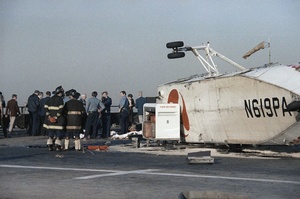 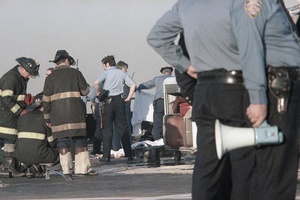 On May 16th, 1977, a New York Airways helicopter killed five people in Manhattan. While it did not crash, it did tip over as it sat idling on the heliport atop the Pan Am Building (now the MetLife Building, at 200 Park Ave) in Midtown. This caused the aircraft to come apart—as it tipped over a large rotor blade snapped off and, as the NY Times described it the next day, "slashed people to death before coming to rest 59 stories below and a block away on Madison Avenue." The first four victims were on the roof, the fifth was on the street below. Others suffered non-fatal injuries.

In the NYT account, they report that the blade acted like "a gigantic boomerang," noting that the incident happened around 5:30 p.m. during the height of rush hour. The chaotic scene was not easy for first responders to get to, either—"emergency medical crews encountered delays of 30 to 45 minutes in getting the injured out of the building because elevators had been shut down on the upper floors."

A spokesman for New York Airways told the paper that the copter was a 50‐foot long 30‐passenger Sikorsky S‐61 which had just "made its 10‐minute trip from Kennedy to the Pan Am roof without incident and had been on its pad idling for about one minute of a three‐minute turnaround when the accident occurred."

The Airway had been operating since the early 1950s, with service to the Pan Am building starting in December 1965. This was the Golden Age of helicopter travel, and it came with the promise of commuting above the street grid. This, of course, brought concerns from locals that on top of noise issues, this kind of helicopter traffic over highly populated areas was potentially dangerous.

In 1999, the NY Post looked back at the crash, noting that "the crowded streets around Grand Central Terminal became a war zone" as the incident "hurled death from above." Not only did pieces of the blade come down, but glass and parts of the Pan Am building—which the blades hit—also landed below. The Post disturbingly reported that "bits of bodies mangled by the flying debris were scattered in sickening disarray." One onlooker told them, "I looked up. All I could see was garbage, debris, blue pieces of paper, glass and stone falling... People were running everywhere for cover." The 1977 helicopter accident atop the Pan Am building came after years of controversy about the New York Airways service flying over Manhattan.
gothamist.com
m/ ^_^ m/ "The goal of all life is death" - Sigmund Freud
​
You must log in or register to reply here.

Crocodile Attacks and Kills a Woman in Mexico