Hurricane Dorian is expected to strengthen into an "extremely dangerous" storm as it heads towards the US mainland, the National Hurricane Center (NHC) has warned.
Dorian is currently a category one hurricane, but could be category four by the time it reaches the mainland.
The storm is expected to hit somewhere between Florida and southern Georgia, possibly late on Sunday, the NHC says.
Florida's Governor Ron DeSantis has already declared a state of emergency.
He told residents it was "important for Floridians on the East Coast to monitor this storm closely", advising them to stock up on at least seven days worth of food.
The NHC noted the risk of "devastating hurricane force winds along the Florida East Coast" in its latest advisory.
A spokesman told news agency Reuters that winds were expected to reach 130mph (210km/h) over the weekend - making it a category four storm.
On the Saffir-Simpson scale, a category four storm is the second strongest, capable of causing "catastrophic damage".
The warnings come after the eye of the storm missed the main island of Puerto Rico, sparing it significant damage, as it headed north-west on Thursday.

What's the forecast?
As of Thursday morning, the storm was packing winds of 85mph and has been predicted to bring up to 12in (30cm) of rain when it reaches land. It is currently some 220 miles (355km) north of Puerto Rico's capital, San Juan.
Dorian grazed the edge of the main island of Puerto Rico but the US territory's smaller islands, Vieques and Culetra, have been battered by heavy rain and high winds.
On Wednesday, wind gusts of 111mph were reported close to St Thomas in the US Virgin Islands, just east of Puerto Rico.
The NHC expects Dorian - which is travelling in a north-westerly direction at about 13mph - to reach major hurricane status by Friday.
According to the latest update, it should pass "well east" of the south-eastern and central Bahamas on Friday, before moving over or near parts of the north-western Bahamas on Sunday.
Forecasters have warned of life-threatening flash flooding and rip-current conditions as the storm moves across the region. 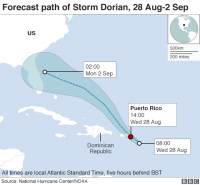