Vast swathes of the Arctic are suffering from "unprecedented" wildfires, new satellite images have revealed.
North of the Arctic circle, the high temperatures are facilitating enormous wildfires which are wreaking ecological destruction on a colossal scale.
It comes after the world’s hottest June on record which has been followed by a devastating heatwave in the US, with Europe forecast for the same treatment later this week.
Satellite images reveal fires across Greenland, Siberia and Alaska, with warm dry conditions following ice melt on the enormous Greenland icesheet commencing a month earlier than average.
Pierre Markuse, a satellite photography expert, posted images showing smoke billowing across massive areas of uninhabited and wild land.
The pictures show forest fires and burning peat. They also reveal the extent of the damage the fires leave behind. In Alaska wildfires have already burned more than 1.6 million acres of land.
Mark Parrington, a senior scientist at the European Centre for Medium-Range Weather Forecast, said the amount of CO2 emitted by Arctic wildfires between 1 June and 21 July 2019 is around 100 megatonnes and is approaching the entire 2017 fossil fuel CO2 emissions of Belgium.
“I think it’s fair to say July Arctic Circle wildfires are now at unprecedented levels, having surpassed previous highest#Copernicus GFAS estimated July total CO2 emission (2004/2005), & last month’s 50 megatonnes … and still increasing,” he tweeted.
The World Meteorological Organisation (WMO) has described the fires in the northern hemisphere as “unprecedented” and warned of the enormous impact they are having on CO2 levels contributing to the climate crisis.
“Since the start of June, the Copernicus Atmosphere Monitoring Service (Cams) has tracked over 100 intense and long-lived wildfires in the Arctic Circle,” the WMO said in a statement.
“In June alone, these fires emitted 50 megatonnes of carbon dioxide into the atmosphere, which is equivalent to Sweden’s total annual emissions. This is more than was released by Arctic fires in the same month between 2010 and 2018 combined.”
“Although wildfires are common in the northern hemisphere between May and October, the latitude and intensity of these fires, as well as the length of time that they have been burning for, has been particularly unusual,” the organisation said, quoting Dr Parrington.
“The ongoing Arctic fires have been most severe in Alaska and Siberia, where some have been large enough to cover almost 100,000 football pitches, or the whole of Lanzarote. In Alberta, Canada, one fire is estimated to have been bigger than 300,000 pitches. In Alaska alone, Cams has registered almost 400 wildfires this year, with new ones igniting every day.”
The average June temperature in the region of Siberia where wildfires are raging was almost 10 degrees higher than the 1981 – 2010 long-term average.
The WMO added: “The northern part of the world is warming faster than the planet as a whole. That heat is drying out forests and making them more susceptible to burn. A recent study found Earth’s boreal forests are now burning at a rate unseen in at least 10,000 years.”

http://www.msn.com/en-gb/news/world...ges-show/ar-AAEHMVB?li=BBoPRmx&ocid=DELLDHP17
(including images and a vid)

The frozen extremities of the northern hemisphere are melting at a near-record rate as heatwaves buffet the Arctic, forest fires tear through Siberia and glaciers retreat on Greenland fjords and Alpine peaks.
Unusually high temperatures are eating into ice sheets that used to be solid throughout the year, according to glaciologists, who warn this is both an amplifying cause and effect of man-made climate disruption across the globe.
Greenland – which is home to the world’s second biggest ice sheet – is likely to have shrunk more in the past month than the average for a whole year between 2002 and now, according to provisional estimates from satellite data. Surface ice declined in July by 197 gigatonnes, equivalent to about 80m Olympic swimming pools, according to Ruth Mottram of the Danish Meteorological Institute. An additional third of that amount is likely to have been lost from glaciers and icebergs.
The trend is accelerating. Wednesday was by far the biggest single-day melt-off of the year. “This was one of the highest ever and it is possible today [Thursday] will be even bigger because the heatwave is continuing,” said Mottram.
With more than a month of the melt season to go, 2019 is already one of the top 10 years for ice loss in Greenland. The extent is thought unlikely to beat the record in 2012, but Luke Trusel, an assistant professor of geography at Penn State university, said the strength of the melt was greater.
Temperatures have been 10C or more above normal this week. Even at the summit of the ice sheet – which is 3,200 metres above sea level – there were 10 hours at or above freezing temperatures yesterday, which is extremely rare, he said. More broadly, ice core analysis has shown that the runoff is at levels expected only once every century, possibly even every millennium.
“What was highly unusual in the recent past is becoming the new normal. The Arctic is far more sensitive to warming now than even a few decades ago,” Trusel said.
The impact on sea level has not yet been calculated, but the high temperatures are likely to accelerate the calving of the giant Petermann glacier, where at least two huge cracks have been identified in recent years. Giant chunks of ice – each several kilometres in length – are expected to collapse into the ocean in the next few years.
The Russian government has belatedly declared a state of emergency in four Siberian regions and reportedly sent troops to help extinguish forest fires that have ripped across an area the size of Belgium.
This follows record-high temperatures in several locations. Last weekend, Norway registered its joint hottest day ever. More than 20 areas in the north of the country have recently experienced “tropical nights”, with temperatures above 20C from dusk until dawn.
In the Canadian Arctic, which is warming two times faster than the global average, locals have suffered record wildfires, and permafrost is melting decades ahead of predictions. Last month, the far northern community of Alert, Nunavut, registered a record-high of 21C, which a local meteorologist said it had never been seen that close to the pole.
European mountains have been affected too. Authorities have warned that the slopes below the Matterhorn’s 4,480-metre peak are increasingly prone to avalanches and landslides because the ice-core is warming. High-altitude lakes of meltwater have also been reported in the Mont Blanc mountain range in France.
In Switzerland, the threat to alpine glaciers has been so alarming that more regions are using giant fleece blankets to try to insulate the ice from the hot air. Even so, the country’s glaciers lost about 0.8bn tons of snow and ice during the two recent heatwaves, according to glaciologist Matthias Huss.
“Absolutely exceptional for a period of only 14 days in total!” Huss said on Twitter. “And the summer is not yet over.”

https://www.theguardian.com/environ...ord-levels-of-ice-melt-in-northern-hemisphere (with a scary graphic I can't see how to copy in, plus some pics).

Meanwhile here in the UK, RAF Chinook helicopters are frantically trying to shore up a dam which is close to collapse after a monster cloudburst, and a whole town has been evacuated. 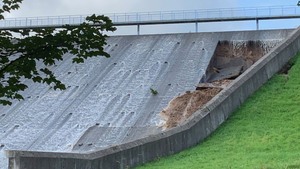 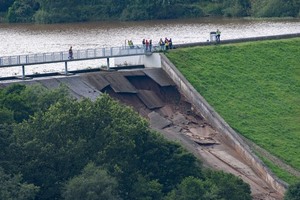