Dead Spartan Warriors. (Not everyday you see this)

Tell me what you would do to these two

Dead, helpless. Muscular. Would you fuck him, eat him or both

Okay, just keep posting these, I love them

What would you do to this piece of fresh meat

I can play them for years

Meaty, sexy, hunky. Tell me what you'd do if he was yours

It would be a shame to let this meat go to waste. 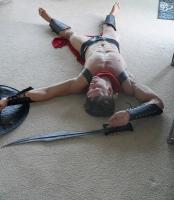 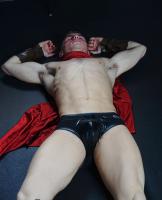 What would you do this slain warrior. Look at him lying there. That hot body and nice legs just waiting for you

Or this one, lying on his side helpless and waiting to be abused

The Spartan lying on his back is most likely dead, possibly from a sword thrust into his back during the frenzy of mass combat. However, no wounds are visible in his current posture. After the battle, once the Spartans have been slaughtered, his death must be verified, along with the deaths of the other fallen studs. It is suspicious that the warrior clutches his weapon. I am mindful that like his dead comrades, he is strong and athletic. With one of his knees bent and his foot flush with the ground, he could be poised to spring up suddenly and take me and a few of my men out before he is inevitably put down and added to the body pile. So, to answer the question, in an abundance of caution, I would shoot an arrow into his chest from a short distance and sink the shaft into his heart. If he responds to the strike, we will know he was mimicking death in the ruse of the possum, but it will not matter. He will go to his reward with a skewered pump. If he was indeed dead all along, nothing more than a single arrow has been wasted on him. I might even be able to use the shaft again, after I pull it from between his ribs. I admire this Spartan and his manly death. I will claim trophies from his handsome corpse. Of course, his weapon and various items from his gear are worthy souvenirs. I am inclined also to cut off one or more parts of his anatomy and take them with me. Many of my comrades who engage in this practice regularly sever an ear from the enemy dead. Others slice off the nips of particularly worthy specimens. The disks of chest flesh make impressive amulets once they have been tanned. As for me, I will investigate possibilities inside his codpiece.

Whilst out for a stroll you find this fallen spartan.
Do you carry on walking and leave him to decompose and be scavenged by animals or do you have some fun.
What would you do to him

Muscular, sexy hunky. Leave him to rot or be eaten. or have some fun

What would you do to these fallen warriors.

Brian2012 said:
Whilst out for a stroll you find this fallen spartan.
Do you carry on walking and leave him to decompose and be scavenged by animals or do you have some fun.
What would you do to him

Muscular, sexy hunky. Leave him to rot or be eaten. or have some fun

What would you do to these fallen warriors.
Click to expand...

I just wanna fuck the second one

You stumble across this dead warrior and his thick legs.
What would you do to him or would you leave him to rot and the animals

Look at this muscular hunk. All helpless an waiting for you, What would you do to him? 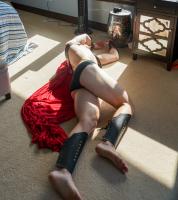