These horse soldiers were stripped clean. All of the uniform could be put to some purpose. The tattered blue coat over this poor soldiers body was put there for modesty"s sake. Can you imagine the horror of the scene as these soldiers were discovered by their comrades in arms? Some men wouldn't mind if their tool was left standing and obvious, but, sad to say, that too was spirited away. Maybe it's good for soup stock or magic potions. After all, what good is a soldier without his weapon?

Ivan thank you for your pictures, aye the French officer should be decently buried in a coffin in clean uniform, he has spats on we'd be proud on in No 2 dress, they are such a pain to get on and button when stiff and whitened with blanco or the easier forms now available. Us common troops get a muddy trench at the battlefield in our bloody ragged uniforms, or are pickled, shipped home and put in as cheap a pine coffin as the MoD can find. None of us would care if stripped bare and exposed like the slain cavalrymen above, but most would prefer our manhood proudly on show rather than taken from our soldier corpses before burial, and keep my weapon beneath my kilt in life and death.
dulce et decorum est pro patria moria

Fighting the Zulus was an embarassment to the British in the sense that the son of NapoleonIII, Prince Eugene was killed by the Zulus. They said if they knew who he was they wouldn't have killed him, and the British had insisted he be kept safe. Alas, things seldom go the way they are planned in war, and Prince lies at St. Georges Chapel. I have the same model boots (Grand Prix) as he was wearing. His body is represented in stone lying on top of the coffin. I took the photo, and promptly lost the roll of film. 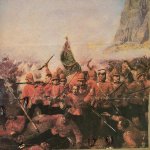 How much attention was given to this youth's burial? Did a hole fast? Poor gasoline on him? What's to become of our American boys injured in the last wars? I hear their medical costs have not been funded. They have to wait 8 months before they get any action, if any. If I were in charge, before they go for war, a sperm bank for each to continue his line. When a soldier is killed in war, not only is he ended, but also descendants upon descendants. (Maybe the same should be considered by gay men- all that good looks and intelligence-lost forever.)

Ivan - I doubt any Army would want to waste petrol cremating the large numbers of men killed in infantry actions - the German parachutist shown was probably wrapped in a sheet / parachute or blanket and buried with comrades in a field trench grave, as befits a fighting man. He has blood on his mouth was probably shot in the chest, lies as he fell, penis hard in his combat trousers, crotch wet, his final seed oozing out, balls loose. Maybe an enemy will search the body and pull his combats down to expose him. Most of us don't want to be taken anywhere after death, just buried quickly where we fall with comrades. It is a pity your country is not taking care of its veterans, doing so is part of the cost of war, sometimes I wonder if our governments prefer we are killed to save on future costs. You are right we should be required to have our sperm taken and stored before we go to war, for use in fertility clinics etc, so that we can live on, often we do it the natural way, as young men most soldiers have a very high sex drive and knowing we are going to war seek out lassies to fuck and impregnate, they are drawn to the uniform and fit young warrior naturally, and want it, pity that contraception now too often gets in the way, and fear of the Child Support Agency, DNA tests - a warrior should produce a replacement before death takes him and keep the country strong.
dulce et decorum est pro patria moria

Out of the trenches with the call-Do you want to live forever. And the flower of these fighting nations lie still in their coffins. If there isn't a heaven, how cruel a hoax . What a joke.

The horse soldiers knew it was either fight or die.

Often it os "fight and die" - only the privileged officers get coffins in wartime, us common troops are shovelled into trenches, after anything useful has been stripped from us, I wouild hope to keep my bloody shirt and kilt, lucky to be wrapped in a blanket or sheet, for a shroud, I am sure Heaven / Valhalla / Tir nan Og is where we soldiers go after death.
dulce et decorum est pro patria moria

What's a few bullet holes in the uniform I love. It will make it easier or the worms to feast on my body. 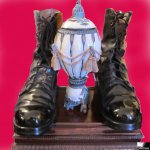 While most of the funerals I have attended for military KIA end in a proper burial, there have been a couple where the man is cremated.The casket is brought to the cemetary and observances are made. Earlier, I had gone to a similar funeral, but I was not allowed to go to the grave site. It was a closely garded secret. I asked at the office and no one would say anything about the procedings. It was my school teacher ears that overheard "cremation".
I have a treasure in this photo- some ashes of a hero of mine. a marine of WW2 days- He served with Tyronne Power- every inch a marine.

Something I saw on television-many corpses of veterans are left unclaimed in repositories. How sad to go to the grave site of a marine who died in 1960's - alone there . Some years later, he is joined by his mother. Now completly ignored by the rest of the world. A man came into the bar and afetr a few drinks, he told me his brother was in the back of the truck. I said- Why don't you bring him in? he's a KIA and wanted to have his ashes on Provincetown bay. You can only guess what I was thinking.

Just my gut feeling Ivan, I have always felt we soldiers should be buried especially when KIA, the warrior's corpse should decompose into the ground, preferably in uniform and alongside his comrades. It seems wrong to destroy our bodies in fire, the only cremation I'd consider is Viking style Greeks and Romans used to burn many of their dead soldiers, but the European tradition has always been for mass burial.
dulce et decorum est pro patria moria

Not too much of his uniform left. How about saving his head and boots in a glass case- like snow white.

In reality, there's not much left.

The original photo touched me. This is after the fight and the bodies are ready to be shipped home. Imagine having to tie the mouths shut. I've seen hands tied together. The senselessness of wasting such young bodies is war. Why his boots were used as a pillow remains a question. Maybe, he was the darling of the regiment and nobody wanted to desecrate him, or maybe his boots meant a lot to him. I did take a liberty with the death scene by making him hold hands with his best buddy. Men have died protecting their friends. I hope they travel beyong the great divide together.
I have a mini museum of mannequins dressed in military uniforms. 2 of them represent a ww2 Marine and his best friend. Many a story of the love between them was told to me by John, one of the two. His ashes are in the breast pocket . If you are interested, I'll post a photo. Mind you, the love I am speaking was not a physical love, but the love one soldier has for another.

For all I know, he could have been thrown into those bushes and rot away. His camouflage uniform didn't help, but he was in open sight. When one dies like this, is one aware he is loosing blood and when it drains sufficiently, the lights go out? If the brain is shut down, does the heart know it?- Why does it continue to pump? Have you noticed when a memorial is done, there are always the boots, and the rifle. What do the boots represent? (thank you Ogrish)

It is surprising that most people do not want to talk about death. Maybe, if they did , they would realize how precious life is. People freak out if a child is molested, but it's ok to send one of to certain death.

Sex rears its ugly head in so many forms. France lost its glorious manhood with Napoleon, you an fill up the blanks re other countries.

Men who bleed out from a wound usually lose consciousness before death takes them, it is not a bad way to go, maybe time for a final prayer to comfort and ease passage to the afterlife. For men shot in the head death is mercifully swift, usually not even time for a death cry, and they are often found with a full on death erection to proudly show. Tying the mouths of the slain shut is for the benefit of the living, once in whatever shroud can be spared the soldier does not care how he looks, he wants only to rest and decompose in the soil. Sending young men to war is part of the human condition, we have tribes, we fight for resources and mates, to prove our manhood, shed no tears for us soldiers if we go by choice when our country asks.
dulce et decorum est pro patria moria

Old soldiers never die, they just...... I was a little boy during WW2, remember Winnie as well as thousands of uniformed men going off to die. My father's best friend was waiting for the attack call in his foxhole, yelled to the rest of his buddies" What are we waiting for" got up and was cut inhalf.