You have to hand it to Boris - he really tries to keep up with Trump's level of idiocy , though even this isn't quite badger-grade.
How can this possible be a sensible thing to do? 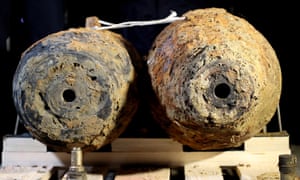 Second world war bombs recovered in Germany in 2020. Photograph: Friedemann Vogel/EPA
Bomb-disposal experts have warned it would be too dangerous to build a bridge between Northern Ireland and Scotland if it was to involve spanning the vast offshore munitions dump that lies on the most direct route over the Irish Sea.
The most direct route for Boris Johnson’s idea of a 28-mile bridge would involve crossing Beaufort’s Dyke, a trench that contains more than 1m tonnes of unexploded munitions, plus chemical weapons and radioactive waste.
Robin Rickard, a consultant with the explosive ordnance advisers Exord, said “any intrusive works such as piling associated with the construction of bridges would pose an unacceptable level of risk” because it could disturb the munitions on the seabed.
He added: “In my opinion, this would be without doubt an enormous undertaking. Without knowing the planned design and engineering methodology, but assuming it would involve deep intrusive seabed works in proximity to unexploded ordnance, it would thereby represent a significant risk to the project and its personnel.”
The dump site is not regularly monitored by the British government, although the construction of a British Gas pipeline two decades ago resulted in thousands of second world war incendiary bombs being washed ashore, some of which exploded when they dried out. A four-year-old boy suffered burns in Campbeltown, Argyll and Bute, after picking up a device containing phosphorus. The episode led to the last major survey of the maritime site, with dredging for the gas pipeline thought to have been the cause.
Beaufort’s Dyke is about 31 miles (50km) long and up to 300 metres (1,000ft) deep, and lies directly on the most direct route for a link between Portpatrick in Scotland and Larne in Northern Ireland.
British ships sailed out from Cairnryan in western Scotland to dump weapons in Beaufort’s Dyke from the 1920s to the 1970s, including Allied and German munitions after the second world war. Sometimes the vessels did not reach the dyke, the bombs dumped overboard into shallower waters instead. Detailed records were often destroyed at the time. In 1997 it was acknowledged that radioactive waste had also been dumped in steel drums there in the 1950s after what the then Scotland secretary, Donald Dewar, said was “a discovery of old papers in the Public Records Office”.
Deidre Brock, a Scottish National party MP, said she wanted the Ministry of Defence to conduct an “eco-audit” of what was in Beaufort’s Dyke. “I asked how the MoD monitors this ticking timebomb but it turns out no one monitors it and nobody knows what condition it’s in. No one knows what’s down there and no one looks at it. How could anyone think it was sensible to build a bridge over all that?” she said.
The MoD acknowledged that it had a broad “moral responsibility” for the site, because it dumped the munitions there in the first place, but believes that the site is safe because there is no impact on the seabed, a point generally reinforced by experts and the last survey conducted in the mid-1990s.
Rickard agreed, saying that “for the most part abandoned modern munitions are extremely stable as they would not have been primed or fused” although pre-second world war compounds such as Shellite “are more likely to explode if they are subjected to shock from falling shipwreck debris”.
When it comes to underwater munitions, non-intervention has long been considered to be the safest course of action, a policy that was introduced after an failed attempt to lift a wrecked munitions ship off the Kent coast in 1967. An attempt to clear the SS Kielce, about four miles offshore, triggered an explosion that measured 4.5 on the Richter scale. Properties in Folkestone were damaged, although no injuries were reported.
There is also evidence that 14,500 tonnes of artillery rockets tipped with phosgene, a chemical weapon, were dumped in Beaufort’s Dyke after the war. The gas gradually suffocates victims and is six times more deadly than chlorine. Phosgene, however, is destroyed on contact with sea water, and a 1996 survey found no evidence of it or mustard gas in seabed samples. Experts believe that more dangerous nerve agents or other chemical weapons were dumped further afield at 22 locations in the Atlantic.
Brock said Downing Street’s bridge proposals highlighted a wider marine environmental problem, which is being acknowledged in countries such as Norway and Belgium. “Action is being taken elsewhere to start cleaning up the messes left behind by the dumping of chemical, biological and conventional weapons and the radioactive waste is getting special attention. We should not be left behind,” she added.
..

Crocodile Attacks and Kills a Woman in Mexico