2 Ladroes Raped and Killed by Homeowner in House of Wonder

Too good to be true! Amazing story with photos if you can make it through the ‘Googlese’ translation of the Portuguese.

The crime had everything to be perfect, too bad the owner was more dangerous; one of the bodies was found floating in the river

Brazil – Two men, still unidentified, were raped after trying to rob a residence. There was no alarm and no security at the scene, the perfect place to commit the crime.

The robbery was warranted around 2:00 a.m., the suspects used a crowbar to break down the front door of the residence, entered and were surprised by the owner of the house. "The wonder", as it was popularly known to neighbors, because it lived isolated and was not very sociable.

The owner was armed with a 12-gauge gun, which he used to render the suspects who were tied up and thrown into a room, used as a depot.

Unconformed, the owner separated the suspects in different rooms, taking one to his rest room, where he began sexual torture.

On the other side the second bandit tried to get off the ropes, but in vain, in despair screamed for help, but to no avail, the house of wonder was a little far away, no one could help the bandits at that time of the championship.

Time passed and the screams ceased! Moments later the door of the warehouse opens and amazement drags the second man to his room, there, there was no longer the first victim, only blood and feces, would begin the second time of horrors, amazement was not flower that smells.

Then began the second time of revenge, haunting under the effects of remedies for an endomission spent another 4 hours raping the second invader.

The man reported to the police that he spent moments of horror, that the author was extremely cold and that his voice was thick and dragged, spoke several times, "you like to break into the house of others, now I'm invading your piggy bank". The thief was admitted to the psychiatric hospital after 90 days in hospital, eventually dying in his sleep. 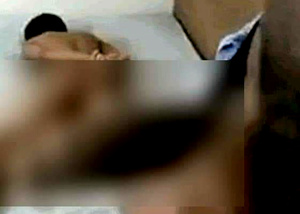 Sucks that it is blurred out
You must log in or register to reply here.