blowglass said:
It almost looks to me like the killer may have used the knife to stab the guy in the left buttocks, as some sort of last insult, or pre-death torture, and then wiped the blade on the guy's left thight, and then stuck it in his underwear as a sort of "calling card". Don't know, but sounds plausible!
Click to expand...

You may be on to something. I'm sure it would be difficult to walk around with a blade that big scraping against your skin, so I doubt it was his. The blood is indeed smeared on his thigh, and the wound in his ass isn't round like a bullet hole would be.

FIGURE IT OUT.....THE TIP OF THE BLADE WOULD HAVE CUT HIM AS HE WALKED...IT HAD TO BE PLANTED AFTER THE FACT........IT IS OFTEN WORN AS A MARK OFALSO...THE COLOR PINK HAS NO DENOTATION IN THE LATINO WORLD.......DESPITE THE PROMINANT CLEAVAGE IN HIS CHEEKS
L

Note to self- don't wear pink bikini underwear to a fire fight....

"Don't bring a knife to a gunfight" 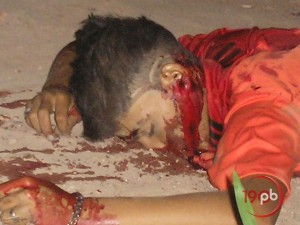 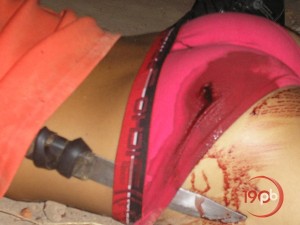 Pic #4 seems to show a (bullet?) hole at the base of his ear. The flow of blood from this area is considerable

Nice ass and good legs. Ths for the post.
T

amazing boy! those gorgeous, shapely legs and butt and cute feet and that sexy little anklet... boy was asking for it!!
A

What a sleek, tight dude. The pink briefs with the knife tucked into them, that sweet, perky little ass with the single bullet wound... made of hotness. Always a favorite.
H

He's ready to be plowed one last time. (And don't tell me that his ass has never had a cock before!)
Click to expand...

Having been in South America few times...asses like his have been plowed many times aby that age. Wouldn't e surprise if those policemen or the gys at the morgue will dump few loads in him dead ass before giving himback to his family.
J

Fuck. I want to fuck that sweet dead ass.

I don't know what I'd eat first: his face or his ass. But I'd definately eat both. Yum.
Flesh and Blood:
Organic and Natural.
Nutritious and Delicious.
L

I want my tongue between his cheeks.
Flesh and Blood:
Organic and Natural.
Nutritious and Delicious.

callmecaleb said:
I want my tongue between his cheeks.
Click to expand...

i want my face and cock in that ass
You must log in or register to reply here.

L
putting his big dick where he shouldn't