A Canadian minister has said he has "no doubt" that a deadly storm in British Columbia is linked to climate change.
Thousands were evacuated after an "atmospheric river" - a long strip of moisture in the air that transports water from tropical areas towards the poles - dumped the region's monthly rainfall average in 24 hours.

The storm severed road and rail links and caused mass power cuts.
One person was killed in a landslide, and at least two others are missing.

Mike Farnworth, the local minister of public safety, told reporters he had "no doubt these are climate-related events".
The impact of climate change on the frequency of storms is still unclear, but we know that increased sea surface temperatures warm the air above and make more energy available to drive hurricanes, cyclones and typhoons. As a result, they are likely to be more intense with more extreme rainfall.

The world has already warmed by about 1.2C since the industrial era began and temperatures will keep rising unless governments around the world make steep cuts to emissions.
The extreme weather in Canada comes days after world leaders met for the COP26 climate conference in Glasgow.

The same region, British Columbia, suffered a record high heat wave in the summer that killed more than 500 people, and wildfires that destroyed an entire village.

The provincial minister of transportation, Rob Fleming, told a news conference that it was the "worst weather storm in a century".
All 7,000 residents of Merritt, about 120 miles (193km) north-east of Vancouver, were ordered to flee their homes on Monday. Snow fell there on Tuesday, and cars could be seen floating in icy flood waters.
Helicopter crews were also sent to the town of Agassiz to rescue about 300 people who became trapped on a cut-off road.

The rains and winds had largely finished by Tuesday afternoon, but several communities remained stranded.

Residents of some neighbourhoods in the city of Abbotsford were told on Tuesday to leave immediately as rising water levels posed "a significant risk to life".
In a press conference on Wednesday, Mayor Henry Braun said water levels in the nearby Fraser River were dropping but warned: "We're not out of this yet.
"If we have another weather event like we just went through, we're in deep doo-doo," he said.

Rescue operations are still under way in the area, and aerial assessments of the damage are being conducted.
The Royal Canadian Mounted Police (RCMP) confirmed on Tuesday that one woman was killed in a highway landslide near Lillooet, about 250km from Vancouver.

Motorist Kathie Rennie told CBC News she saw the landslide come down on traffic that was already at a standstill.
"I just turned around, and I'm just watching the whole side of the mountain coming down and taking out these cars... everything just being swept away. Just complete panic," she said. 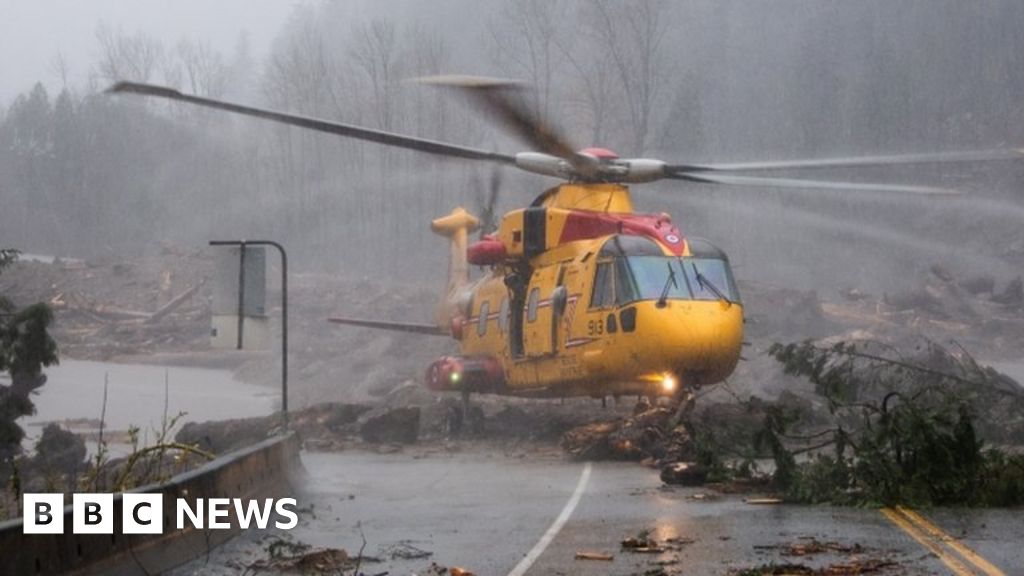 Vancouver storm: A state of emergency has been declared in British Columbia

A major clean-up is under way in British Columbia after a major storm that cut off Vancouver.
www.bbc.com
m/ ^_^ m/ "The goal of all life is death" - Sigmund Freud
​

Abbotsford mayor warns of $1bn in damage from flooding​

During a news conference today, Braun said he spoke to Canada prime minister Justin Trudeau, British Columbia premier John Horgan, and other ministers who assured him that the region had their support following the natural disaster.

“I take them all at their word, but I’ve also prepared them for one big bill at the end this, because this is not just going to be $10-million, or $50-million; this is in the multiple hundreds, if not higher than that,” said Braun this morning.

Braun also added that current cost estimates didn’t include replacing the city’s dikes, as a cost for that is still be generated. A previous study done years ago estimated that only replacing the Sumas and Matsqui dikes would cost around $400mn.

“They said that the province will be there for us. When you start totalling those things up, you’re going to get up to $1-billion, I predict,” said Braun.

This is my part of the world. While the results are catastrophic, having every road and rail route cut off, the number of deaths has been extremely low, only 5 confirmed fatalities, all of those in landslides north of Whistler. The roads and railways South into Washington State are still open, except that the main Southbound Railway runs through Abbotsford, and that line is cut off.
This is way less devastating than the heat dome and wildfires of the Summer, well over 500 fatalities. Some of those bodies weren't discovered for weeks!
And something that is ongoing is the Opiod crises, over 100 deaths a month in Metro Vancouver. This is really a poisoning crises, as virtually all opioids are now basically Fentanyl, and there is a lot of Fentanyl in other "recreational" drugs!
Ashes to Ashes, Dust to Dust

We are still getting heavy rains. The highways that were opened have been closed again due to fresh washouts. One railway line has been re-opened Eastbound, and the roads South into Washington State are moving better. With another storm coming through tonight and tomorrow, things could get uglier!
Ashes to Ashes, Dust to Dust

@fireboots It’s my neck of the woods too. Crazy shit has been hitting BC. Luckily, where I’m located, the most I have had to deal with the past few years is wild fire smoke from pretty much everywhere in every direction depending on wind. Los Angeles, Alberta, elsewhere in BC, we get it all here.

@SatansWhoreBoy , And now we have a cold snap. A few record breaking lows, but nothing deadly like the Heat Dome last June. Mother Nature is making her presence felt.
Mind you, Fentanyl is doing a much better job of reducing the surplus population.
Ashes to Ashes, Dust to Dust